New McLennan County District Attorney Barry Johnson announced Tuesday all 24 of the cases against bikers involved in the Twin Peaks shootout would be dismissed. 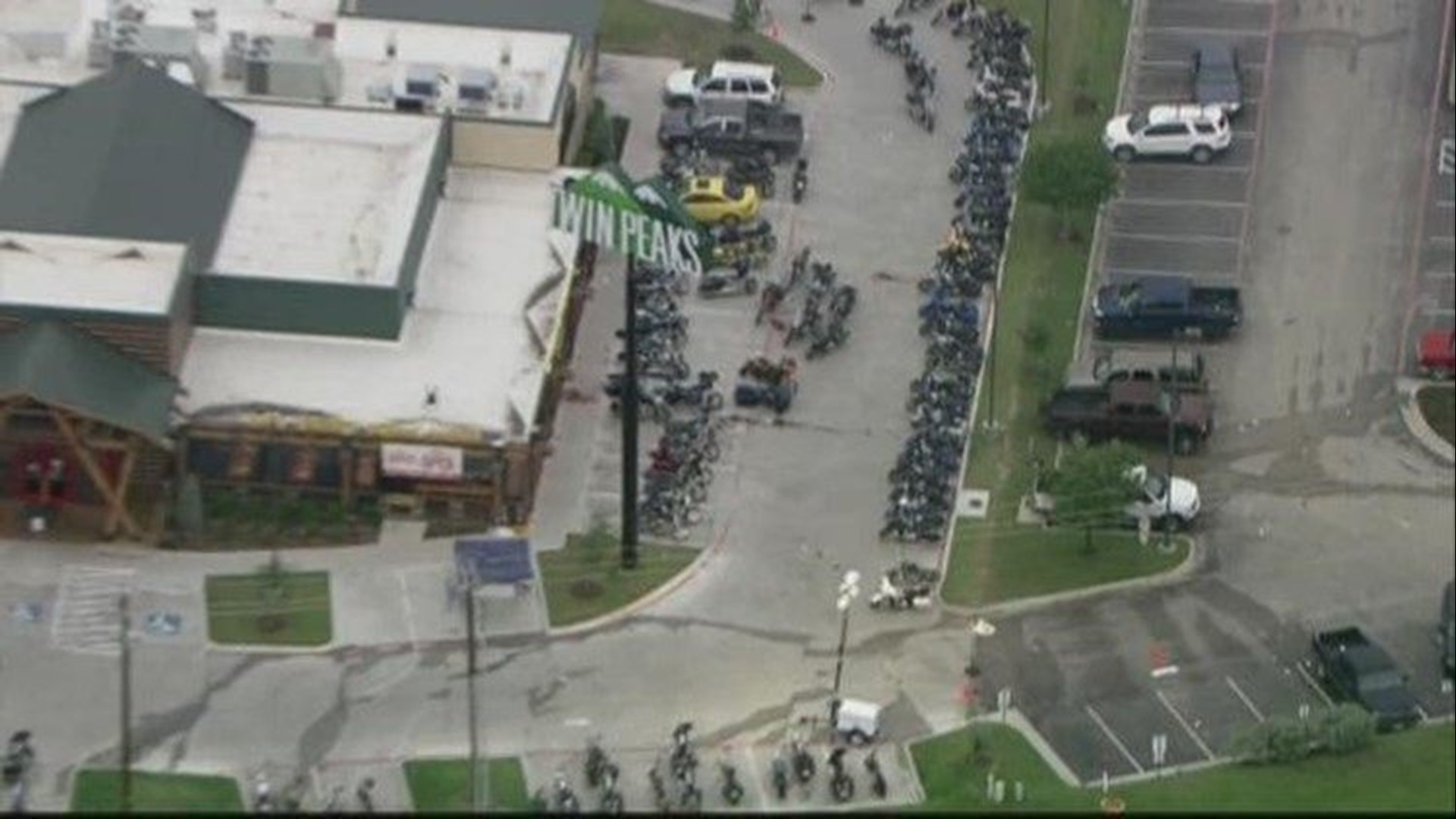 "This is a difficult decision, which must be made based on the existing facts and evidence in accordance with the laws of this state and in the interest of justice, and not a decision that can be made based on emotions or personal feelings or preferences," Johnson said.

Nine people were killed in a shootout between rival biker clubs outside the Twin Peaks in Waco on May 17, 2015.

A total of 177 people were arrested that day and 155 were indicted.

"I agree that there was reasonable suspicion to support the detention, and sufficient evidence to provide probable cause to support the arrest and the grand jury’s subsequent indictment of the 155 persons for the offense of engaging in organized criminal activity," Johnson said. "It is after the initial indictment of the 155 individuals that I disagree with the manner in which the prior district attorney handled this matter."

Jake Carrizal, a leader with the Bandidos biker club, is the only person to be tried in the case. His trial ended November 10, 2017 in a mistrial.

RELATED: Jury was leaning toward a not guilty verdict in Twin Peaks, juror says

The majority of the cases were dismissed in 2018, leaving 24 people still charged. Three of them faced a murder charge while the others faced charges that included riot, tampering with physical evidence and unlawful possession of a firearm. 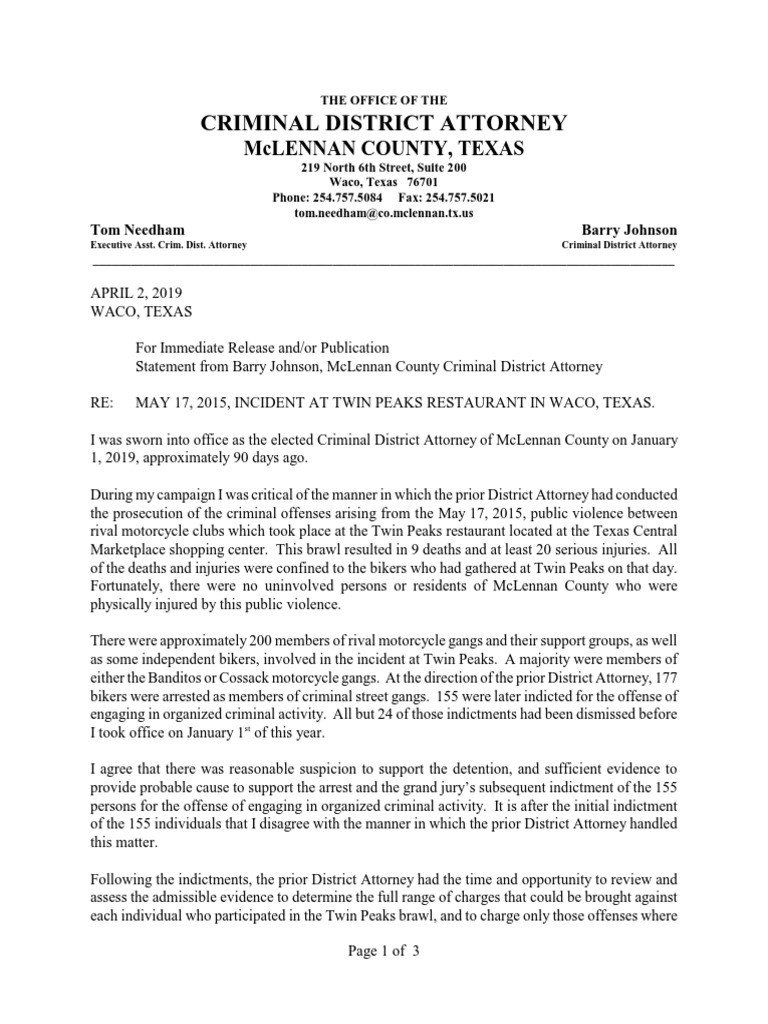 Dismissal of Twin Peaks cases | Prosecutor | Reasonable Doubt
As District Attorney, when my office presents evidence to a jury in McLennan County, I know the jurors will conscientiously perform their duties. Regardless of whether a jury renders a verdict of guilty or not guilty, every member of the district attorney's office appreciates their service as jurors and will accept and respect their verdict, even though we may on occasion disagree with the verdict.

Former McLennan County District Attorney released a statement to Channel 6 that was in stark contrast to Johnson's assertions.

"I absolutely disagree with the overall result as well as several statements and accusations within Mr. Johnson’s press release. However, it is solely his decision on how to proceed with any case in the district attorney’s office. I respect the fact that the voters of McLennan County chose Mr. Johnson to make these types of decisions," Reyna said.

The shootout was primarily between members of the Cossacks and the Bandidos according to authorities.

At least 475 weapons were recovered, including guns, brass knuckles, knives, and clubs. More than 130 motorcycles and 91 vehicles were impounded after the shooting.

Dozens of civil lawsuits on behalf of many of the bikers have been filed in the years since the shootout. The list of defendants includes former District Attorney Abel Reyna, former Waco Police Chief Brent Stroman, McLennan County, the city of Waco and several of the officers who were at the scene.

Clint Broden is one of the many attorneys involved in the civil suits. He represented five of the criminal defendants. He released a statement to the media Tuesday afternoon.

"We are, of course, pleased with the actions of the new District Attorney Barry Johnson and applaud him for his efforts. On the other hand, the fact that this case is going on four years is a true miscarriage of justice. Many lives of those falsely accused were irreparably damaged by former District Attorney Abel Reyna not to mention the victims and their families who were denied justice from those actually responsible.

The actions of Justice of the Peace Pete Peterson should also never be excused. He set identical $1 million dollar bonds and more than 170 people spent three or more weeks in jail, losing jobs, homes and families, for charges that were ultimately dismissed.

In addition, it is hoped that members of the news media learned a lesson. While certainly not all members of the news media, and reporters for the Waco Tribune-Herald are truly an exception, in the beginning days of this tragedy the news media drank the kool-aid of roving biker gangs that Patrick Swanton, Waco Police spokesman, peddled only to ultimately find out that this narrative was false and that many innocent people were falsely arrested.

In the end, my clients are certainly relieved but the anger from the false arrests will never go away."

Other stories on KCENTV.com

Viral video: Boyfriend assaults girlfriend after she appears to pretend to break up with him, Waco police investigating

Woman beaten in Deep Ellum parking lot may be charged in the case, sources say