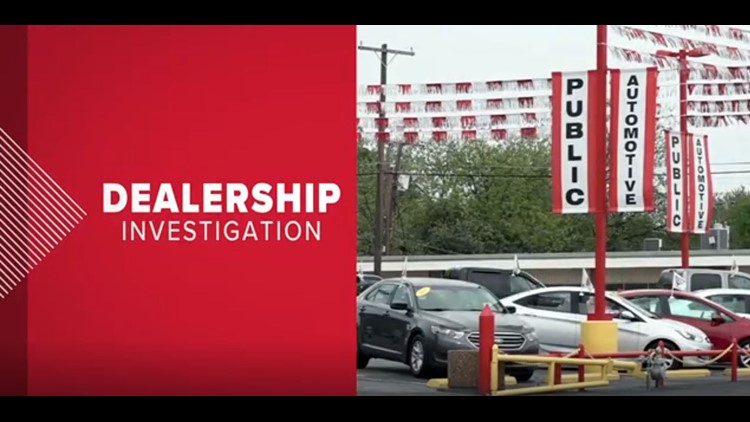 TEMPLE, Texas — A woman told KCEN Channel 6 she drove a used car she bought off the lot of Public Automotive in Temple, only to have it die just a few hours later. Shortly after that, she found out the front driver side brakes needed to be replaced.

Chrysanthamum Porter said Public Automotive had to have known there was something wrong with the 2008 Ford Escape they sold her. KCEN Channel 6 found out on Wednesday car lots are allowed to skip a lot of repairs and still hand you the keys.

Porter told Channel 6 she was tired of her car making grinding sounds, rattling as she goes down the road, and worrying if it will just shut off. She said that's exactly what happened the day she bought it.

RELATED: Waco woman gets refund after buying a used car from Public Automotive

RELATED: Up in Smoke: KCEN investigates second complaint against Public Automotive in Waco

"It hadn't been even two hours," she said. "The car was shaking, smoking and it went off on me."

According to a Killeen mechanic, her left front brake had no pad left and was failing. Porter had to pay for multiple new parts, but she doesn't even want the vehicle anymore.

"I want out of my contract, and I want my money back," she said.

Porter is far from the first person to buy a car from Public Automotive that still needed repairs. At Advance Auto Care in Waco, owner Chris Metz said he's seen cars bought from there with engine issues and brake issues.

"All of the drive belts were cracked and needed to be replaced," he said while looking at the report for one vehicle.

"Brake shoes and brake drums were due to be replaced. They looked like they had never been maintenanced," Metz said looking at another vehicle report.

Most of those issues could be caught by mechanic before the vehicle was sold. So... why aren't they fixed? Is Public Automotive, or any car dealer, legally allowed to sell a vehicle with brakes in need of repair?

Turns out, yes they can.

"As long as a vehicle will stop in a certain percentage of feet, it passes state inspection," Metz said.

The required state inspection proves the vehicle can stop, but provides no guarantee a vehicle will continue to stop. Additionally, the engine isn't checked at all.

Channel 6's Andrew Moore walked into Public Automotive's Temple location to ask why the car was sold in the first place on Wednesday. The manager referred him to the corporate office for an answer. Public Automotive Vice President of Operations Lisa Ramsey emailed Moore and said questions were supposed to be directed to her and not the Temple location. Moore sent an email asking why Porter was sold a vehicle with brakes that were either worn or already failing. Ramsey did not provide any response Wednesday.

Porter said Public Automotive had to have known what they sold her.

"You took my money, and you knew this truck wasn't no good," she said.

If a used car salesman tells you a vehicle passed a state inspection, that doesn't guarantee that it will continue to run correctly, or even stop correctly, for any period of time.

If a dealer doesn't let you take the vehicle to a trusted mechanic to check the car out first, you're better off buying somewhere else.

How to avoid this situation yourself

Texas Lemon Law typically applies to the purchase or leasing of a new vehicle, but it does apply to used cars in some situations, according to the Texas Department of Motor Vehicles' website.

Repairs for used car purchases may be covered under the law when:

KCEN Channel 6 also recommends getting a pre-purchase inspection before buying a used car. The policy for this will vary from dealer-to-dealer, since they're not required by law to allow off-site inspections, however, it would be a major red flag if the dealer is reluctant to allow you to get the car inspected.

These inspections cost about $100 to $250, according to Driver's Auto Mart. It's definitely worth it, so you don't end up with a lemon that needs thousands of dollars in repair fees.

Fight between cousins escalates to shootout in Waco